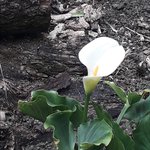 East Barnet - joined over 2 years ago

First-an environmentalist because there is no Plan(et) B. Second -a gardener.Third-cat lover, Fourth -lover of unusual genres of music.